Is Ruby on Rails dying? Is it going to be replaced with Node.js? We all have heard such talks before as if Ruby on Rails is close to its demise, however, we suggest covering this topic in order to figure out what is really going on.

Back to 2010 the framework was considered to be a dominant one, therefore if somebody wanted to create an application within a short period of time, it was exactly the right place to address. Rails surely attracted lots of developers and became fairly popular due to diverse reasons. First of all, the framework was abundant of generators, inbuilt ORM and diverse Command-line interface goodies, allowing programmers to decrease time consumption during a development process. Besides, we cannot help skipping the fact that there were huge world recognized companies the platforms of which were built on Rails. In fact, Twitter used to be such representative. However, why it used to be? Because in 2011, the enterprise moved from Ruby to Scala (Java), stating that the new platform possessed more capacity and was able to provide more relevant features the company needed. In several months, the results of Twitter’s choice was unsubtle, since they achieved a 3x faster search and higher scalability.

But today there is another competitor which stands out by its modern and well devised features and is actually built on JavaScript, called Node.js. It is an open-source platform that is quick, simple and extremely popular among developers. Node.js prevails in some cases as well, as it kills two birds by one stone, providing developers with the ability to work with client side and server side at the same time. Also, if you are a JavaScript programmer there is no need for you to learn Node.js, for it is a homogenous language, you already know it. In case of Ruby, you’ll have to master it, in order to get the most out of it. Even though, there are some people who do not like combining front-end and back-end together, regarding it as kind of mess. 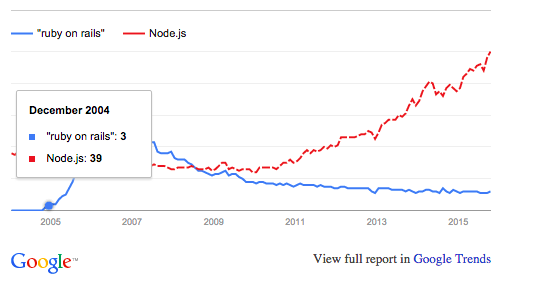 Just looking at the this data, we can clearly see that currently Node.js is far more popular than Rails. However, we cannot state that there won’t be another platform that might easily replace Node. It is a rapidly changing game, that’s why we have no idea what future can bring us tomorrow.

But, keeping on talking about RoR we can assume that the framework could hold the audience by Gems availability, since it demonstrated high performance and work productivity enhancement. However, it’s incomparable to what Node suggests us today – NPM. We all know about npm and its importance in Node’s performance.

So, coming back again to what people prefer utilizing for web-application development, we found it crucial to show you the following results:

Express is a framework designed to work for Node.js within a month was downloaded 2,171,225 times. Meanwhile, Ruby reached only 541,249 downloads, taking into account the fact that it needed 2 months to achieve the result.

Node is not perfect either and makes some developers nervous due to its memory leak, callback hell, concurrency and single-threaded issues. Besides, it’s said that Node is renowned for its development speed, however when it comes to large companies it doesn’t stand out that much, even lacks some speed. Apart from it, Node is not that good at intensive CPU tasks, but everybody has its drawbacks.

As the matter of fact, there are lots of outstanding and world-known companies that enjoy using the platform. We believe their choice is to be looked upon, for they have had a huge experience and know what will work better for you.

“Node.js powers our web applications and has allowed our teams to move much faster in bringing their designs to life”

– Director of Engineering at PayPal

“On the server side, our entire mobile software stack is completely built in Node. One reason was scale. The second is Node showed us huge performance gains.”

To eliminate any kind of gossips or talks that RoR is on its way down to hell, we would like to say that if you take a look what Github says about it, you will understand that its constant improvements and update activities are implemented in the platform, thus we cannot even assume it’s dying unless we don’t observe their work.

But we are positive about Node.js dominance over RoR, coming up to such conclusion was the public trigger, not personal believes.

Hence, having covered this relevant topic, we want to make sure you understand us right, we are not saying that Node.js is an impeccable platform, it’s just easy to master and possesses high scalability and great performance features. It doesn’t necessarily mean that you must apply it, everything boils down to your preferences and what your company deals with.

We hope you have found something utile in this post. However, if you have any questions, please do not hesitate to contact ask, we would be glad to answer.