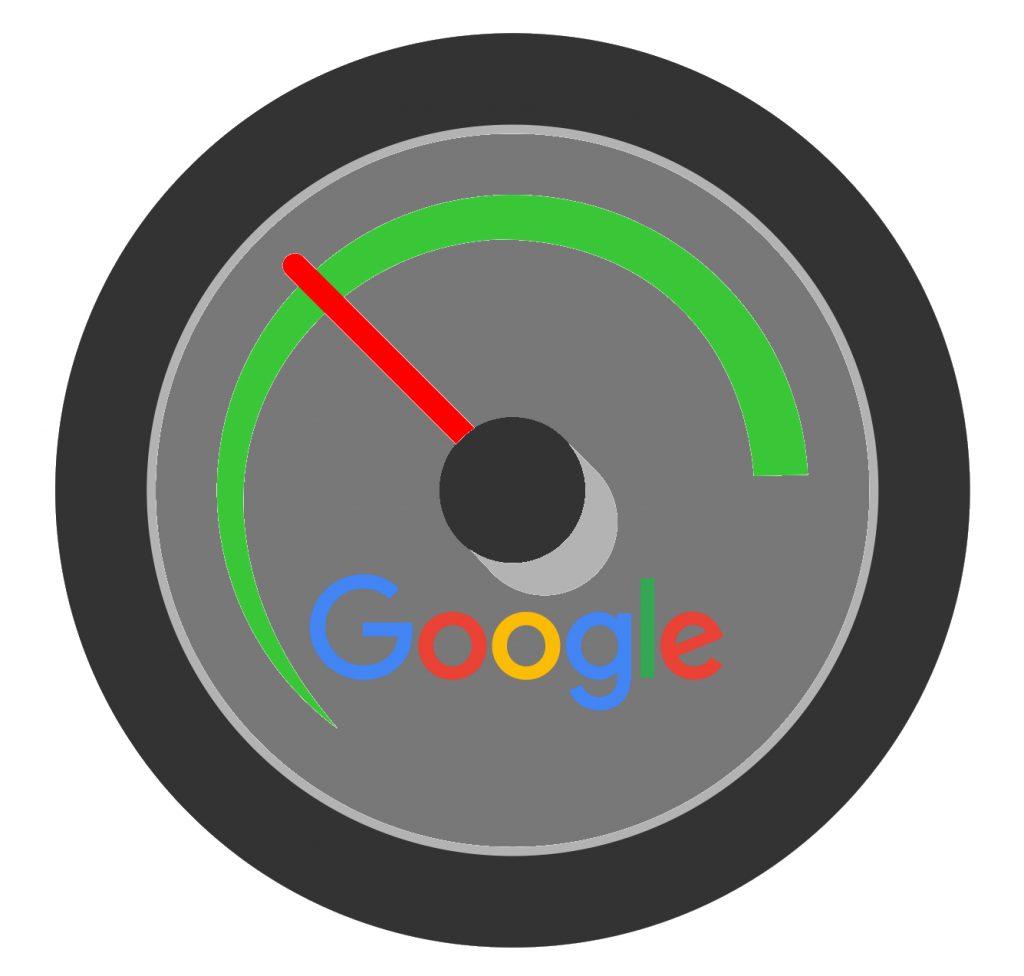 It is hard to imagine how much E-Commerce depends on search engine rankings nowadays. Numerous websites continuously compete against each other for the right to get to the top positions in Google search results with the ultimate aim to drive more traffic and attract more potential customers. It is widely known that the most proven way to get good rankings is through creating a high-end content which is likely to be relevant to other websites and users. Being relevant to people equals being relevant to search engines – this is the concept underlying Google’s famous link analysis algorithm that has been successfully used for years to effectively rank websites based on their potential importance to internet users. So, this is our extensive guide on everything that concerns Google PageRank, its main features, SEO implementation methods, and many more. And as you might have guessed, the guide is fully compatible with Magento!

What is Google PageRank?

Plainly speaking, Google PageRank is an automated algorithm that constantly measures, evaluates, and eventually ranks all existing webpages on the Internet in accordance with their relevance to the user. The relevance is built upon the assumption that the more incoming links a website has, the more important it is.  In other words, a website is likely to get higher rankings through being “cited” by as many websites as possible. Moreover, the relevance will also depend on how relevant citing websites themselves are. What Google PageRank does not consider, however, is the actual content quality of the page.

The idea behind seeking high rankings is that most of the web surfers tend to only pay attention to the first few search results, which is why these primary positions are important for attracting more traffic to a website and thus important for search engine optimization.

Google PageRank appeared to be the first algorithm written for a new type of search engine by Larry Page and Sergey Brin at Stanford in 1996, two years before they founded their worldwide famous company. The name of the algorithm has a well-formed pun accumulating both the concept of a web page and one of its developers’ names.

There are other secondary tools embedded in Google Search engine that make the whole PageRank’s job even more accurate, but we should not underestimate the possibilities this ranking algorithm alone is capable of. Apart from being the first algorithm introduced by the company, it also happened to become the fundamental part of other Google-based search tools as well as most discussed Google’s feature among the internet community.

How does PageRank actually work?

Google PageRank’s algorithm performs relevance measuring of each element included in hyperlinked data set through the process of numerical weighting which allows for defining a relative “importance” of particular internet pages. Numerical weighting is performed in such a way that some elements will eventually be given more priority as opposed to others. As a result, some pages on the same website can be ranked higher than others. The resulting weight of the given page (or element E) will then be presented as the PageRank of E or PR (E).

PageRank’s mathematical algorithm is originally based on webgraph principles, presenting all webpages as nodes and directed links as their edges. Authority pages, such as those having top-level domains, are considered to get higher rank values from the algorithm than hub pages, and higher overall relevance, accordingly. Additional hyperlinks to a page will be regarded as bonus votes during PageRank’s analysis. Thus, a page having the most of incoming links from as many highly ranked pages as possible will itself get a high rank.

This algorithm is often exposed to criticism, as it accepts the possibility of granting a high rank to a web page that has no actual relevance or authority in terms of its content. That is why numerous studies are still being conducted in order to find a way to ignore incoming links to pages having falsely influenced PageRanks. 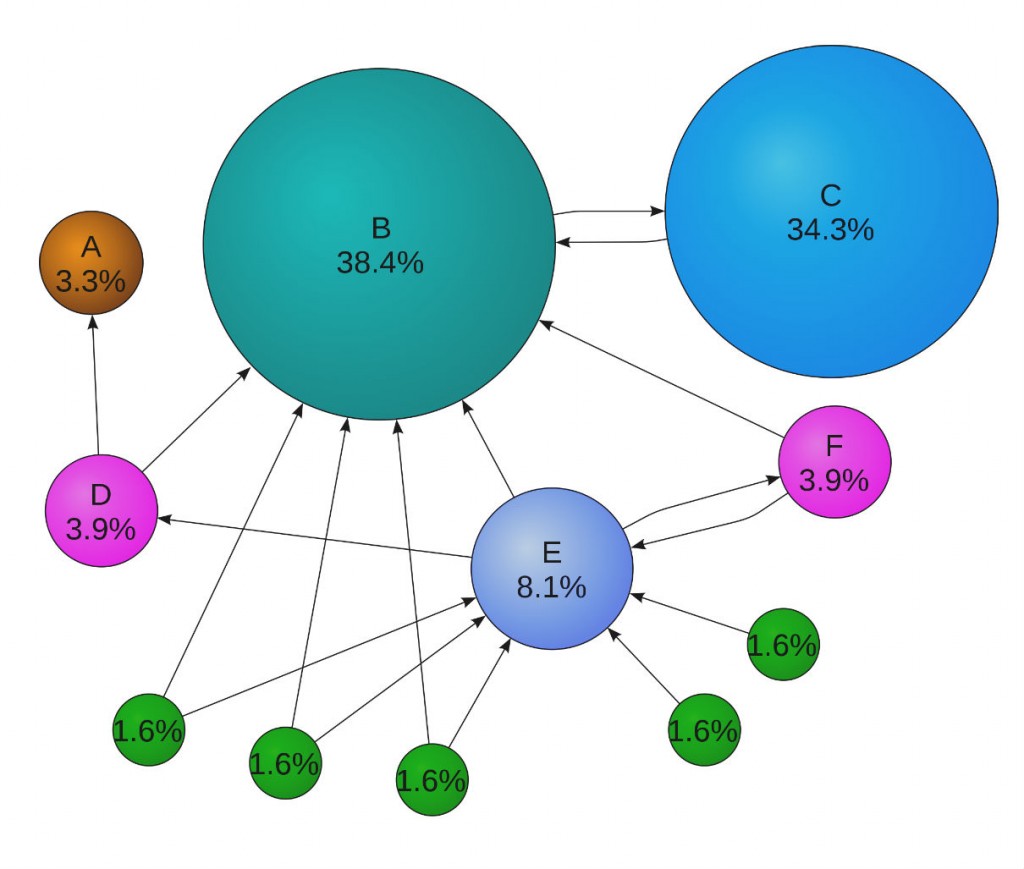 At its core, Google PageRank assigns probability to each analyzed element in the data set that a user is likely to click on a link that will eventually lead him to a given web page. Such probability distribution is said to be evenly divided among all web documents at the starting point of the algorithm’s analysis. Furthermore, PageRank goes through a set of periodic passes (or iterations) in order to assign the exact value to each element of the set thus approaching to the real page value. So, if a page has a PageRank of 0.5, that means that it has a 50% chance that a user will randomly get to it by clicking on a random link.

As a basic example, we will take pages A, B, C, and D as the elements included in the PageRank’s data set. According to the original PageRank theory,  the total PageRank value for all web pages can get the maximum value of 1 (more precisely – any value from 0 to 1). If to assume that the total value of pages A, B, C, and D equals 1, then the PageRank of each separate page will be 0.25. Now, we should connect these pages by distributing corresponding backlinks among them. Let’s say, page B has outbound links to pages C and A, page D has outbound links to pages B, C, and A, and page C has an outbound link to page A. As a result, all pages give equal shares of their value to other page or pages except for A which has no backlinks at all. Because page A does not lose its original value of 0.25 but also receives more shares from all its neighboring pages, it eventually increases its total value to 0.458 thus getting the higher general relevance.

Mathematically speaking, this whole calculation process can be presented in the following equation:

The number of iterations for each PageRank analysis will depend on the total number of analyzed web pages. In the original study of Page and Brin, PageRank algorithm analyzed the network of 322 million web pages by going through 52 iterations. In fact, the more iterations there are, the more accurate the final result is going to be.

Where else is Google PageRank used?

While being a fundamental part of Google’s search engine, Google PageRank is integrated into numerous accessory processes and web tools developed by the company’s developers in order to boost the search engine’s overall efficiency. Here are some of them.

The SERP, or the search engine results page, is a web page containing a search engine’s reply to an actual query based on its keywords. It usually contains a list of the most relevant links pointing to associated web pages accompanied by content-related bits of text below. The position of a link will depend on its PageRank, so the higher rank a web page has, the higher position in the SERP it will get. However, there are many other factors contributing to the final placement of a page in the search results list. For instance, PageRank itself does not take into account page keywords for defining its relevance. The SERP’s algorithm, however, provides the relevance which can be directly referred to the user as he sets an initial request to the search engine by entering a specific sequence of keywords. So when PageRank determines a set of the most relevant or authoritative pages, the eventual sequence of those pages in the SERP will depend on whether they contain the required keywords and, if yes, how well they respond to the user’s query in terms of general content.

The SERP’s sensitivity to keywords has a large potential in the field of SEO, which means that website owners can improve their positions in the search results list by analyzing the most popular keywords and keyword sequences and integrating them into the content of particular web pages. 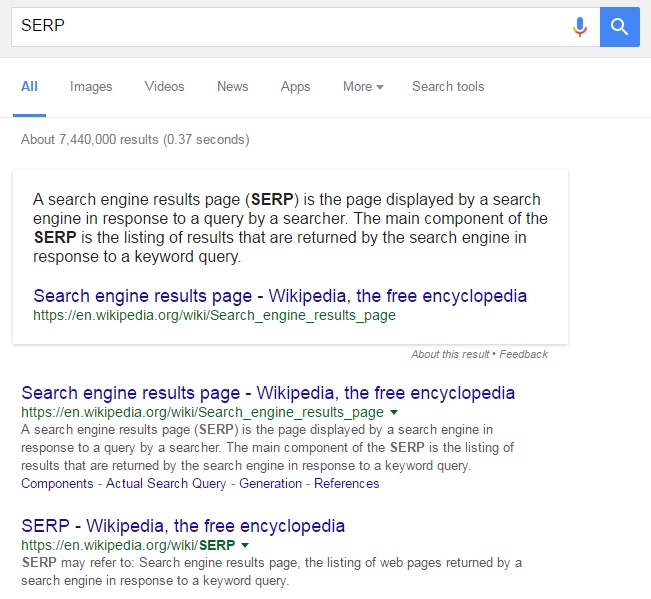 Google Toolbar is a specialized toolbar for Internet Explorer that can also display a PageRank of a viewed page. It usually shows an approximate value between 0 and 10 to provide the relevance of a given web page. However, it is not known whether Google PageRank’s official algorithm is used to determine this value. Moreover, while PageRank is set to update page value regularly, the data provided by Google Toolbar are often outdated. 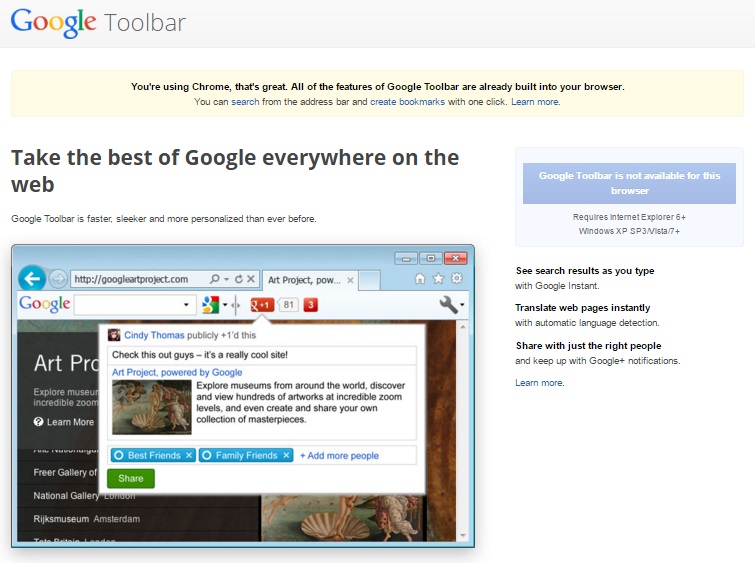 Since 2005, Google has introduced the nofollow value that can be assigned to rel attribute of a HTML link telling search engines not to consider the weight of a specific URL when calculating the value of a target page. It was originally done to prevent users from backlink spamming in other websites’ blogs and comments in order to boost PageRanks of their own pages. However, many web developers made use of this feature. By blocking PageRank weight for some of their internal links, they eventually expected their other pages to get more weight. Google managed to figure out this trick and later modified nofollow system in such a way that PageRank would define the value of a page considering both follow and nofollow outgoing links while passing the actual weight only through normal or follow URLs. 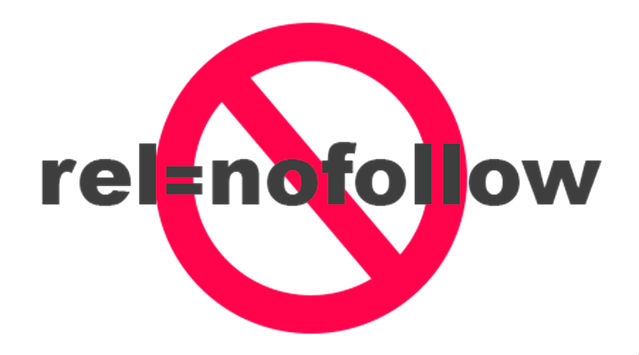 It is nevertheless tempting to find alternative ways of avoiding nofollow limitations for SEO purposes. For now, several techniques were introduced; JavaScript implementation and iframe tagging are among them.

With the gradual growth of E-Commerce niche, PageRank became the basis for a new type of business which allowed website owners to boost their ranks in the fastest way possible. Since then, numerous companies have been founded that specialize in selling highly ranked links for SEO, and the price for them varies depending on their overall value. Buying backlinks is still widely considered one of the most efficient moves in a SEO marketing strategy, as it helps to sufficiently increase popularity and attract more traffic to a particular website. However, Google keeps watch over this kind of activity and strongly punishes those involved in backlink trade by devaluating URLs concerned.

Google PageRank became of use to many other internet projects and services due to its general applicability. Its principles are used for social metrics and other types of data analysis, bibliometrics, and even in sciences, including physics, biology, and chemistry. Particularly, we can meet PageRank in:

Despite the huge importance Google PageRank has in terms of defining relevant web pages on the Internet, there are several drawbacks that make it less appealing to the user:

You can effectively monitor and improve your own website’s relevance by using one of the following PageRank tools and services, which are also suitable for the Magento platform.