Node.js is an open-source platform which is considered to be extremely popular among diverse enterprises due to its development speed, language homogeneity, modern features, simplicity and an enormous community. What I personally like about Node is its “universal approach”, by saying so I imply that the code can be read by both front and backend developers. Besides, it’s relatively easy to find a person who is good at JavaScript. Certainly, there is a great number of people who prefer using it because of its NPM availability, providing a well-devised infrastructure. However, taking into consideration all the characteristics mentioned above, obviously we wonder why some companies come to use GO rather than Node.js. What’s the matter?

First of all, when it comes to company’s growth, Node.js may let you down, since it’s not that good at providing Large Codebase Support, therefore you might have heard such a problem as “Call-back soup”. Besides, we all know that every programming language has some flaws and pitfalls, however, in regard to Node.js they are simply not easy to be fixed. To make a long story short, we decided to demonstrate PipPop’s perspective on advantages and disadvantages of Node.js. The company used the platform for quite a long time, but nowadays has moved to GO, stating that it performs better results for server-side programming in comparison with Node.js.

Founder and CEO of PopTip, Kesley Falter, during a conference mentioned some other drawbacks of Node that she faced on her way: 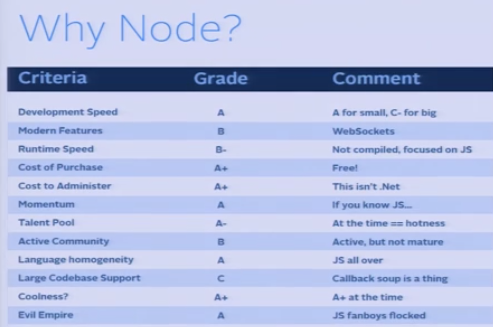 Having taken a look at the data, we understand why it has become popular. It’s definitely a good choice for small companies, as it doesn’t require huge investments and it satisfies needs of smaller enterprises.

Logically, we’ve got a question, is GO any better than Node?

To start with, I’d love to say that in comparison with Node, Go is not a platform, but a programming language, it therefore can be applied in a broader way. Golang attracts developers with its rapidity, capability to process an enormous amount of data, and concurrency. Moreover, it’s been regarded, since despite the fact it is a relatively young language, comparing to JavaScript, it has already performed great results in profiling, debugging and good dependency management. A huge deal of optimizations can be implemented, provided we are able to have all the code inspection process in question, not during runtime, as it JS compiler tends to do. Touching upon disadvantages of Node.js, we can’t help mentioning its scalability problem, and many big enterprises have complained particularly about this issue, meanwhile Golang features scalability, and an inarguable proof of it is Go’s sustaining Twitter, Google, Yahoo, BBC heavy backends. However, if you are a JS developer, willing to move to GO, you should take into account that there will be some new programming concepts you will have to learn, for instance: coroutines, channels, strict typing (with compilation) etc. 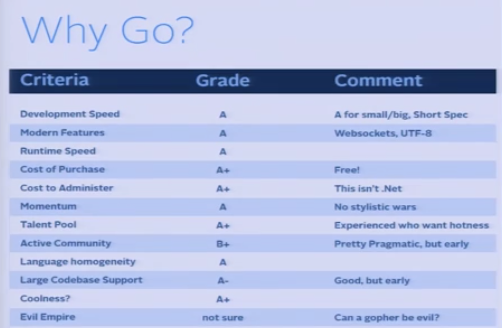 In fact, nowadays Go is gaining its popularity, consequently momentum as well.

To make a conclusion, I’d like to say that it’ll be wrong to say “Node.js sucks” or something, if it sucked, it wouldn’t be so widely utilized by numerous enterprises. But, we need to admit that there are some things GO performs better in, at the same time it lacks some characteristics that Node.js provides. To make it clear, it all depends on how massive your company is. Both Node.js and Golang are good, but it seems GO has a little bit greater potential than Node.js. does.