We are very excited to introduce you to our new partner – . The company is famous for its Magento 2 PWA frontend which can also be leveraged with other platforms. Below, we shed light on what the company offers – its contribution to the Magento ecosystem and the whole world of e-commerce. The future of online storefronts is already here, and you can streamline it right now!

Last year DEITY hit a significant milestone with its open source DEITY Falcon, which is a set of tools designed to empower developers with entirely new abilities regarding Progressive Web Apps. The company’s goal is to enable every professional to create any website or web application as a PWA project with the minimum time and effort but the maximum efficiency and the best final result. Of course, this is one of the first examples of Magento 2 PWA. At the same time, DEITY Falcon can be a basis for a blog, a webshop on top of any e-commerce platform, etc.

DEITY has been started as a proof of concept for headless products. Its developers built a frontend with NodeJS and ReactJS. As for the backend part of the project, it was (and still is) platform-agnostic. Magento 2, WordPress, Algolia, or other systems can empower you PWA project created with DEITY.

Is for the open source nature, it was planned initially but implemented earlier. The team behind DEITY decided not to risk providing the headless opportunities to partners only. Thus, the company could control their PWA initiative, gather enough feedback (not too much of it), and implement changes gradually. The initial version has been implemented in several projects before becoming available to a broader audience. Now, DEITY’s portfolio includes several full shop implementations, comparison websites, blogs, and a modular headless checkout project. What else can you expect from a headless tool?

The existing projects were significant for providing us with the current open source version of DEITY. Developers used them to collect feedback and gain the experience necessary for building an outstanding PWA product. The DEITY team faced many problems on its way to DEITY Falcon including the one related to its architecture, but the limited accessibility played a decisive role here. Working with a limited number of projects, the team rapidly detected and fixed the issue.

Initially, DEITY-core was represented as a single package. Do you imagine, how hard is to extend such a monolith? Adding new custom features was a tough task, so the team decided to take a step back: the whole architecture was refactored. However, it was a crucial decision that made the project flexible and service-oriented.

By sacrificing a list of customer-centric features, DEITY provided its first true users – developers – with the outstanding experience, top-notch quality of code, as well as flexibility and extensibility everybody wanted and needed. In this situation, taking one step back means taking two steps forward. Thus, the more developer-friendly core lets DEITY implement multiple new features and improvements that were initially impossible or associated with vast expenditures of time and effort. The project stands for quality, so why should a group of its users lack it? With DEITY Falcon, nobody is deprived.

The following image shows different development stages of the project: 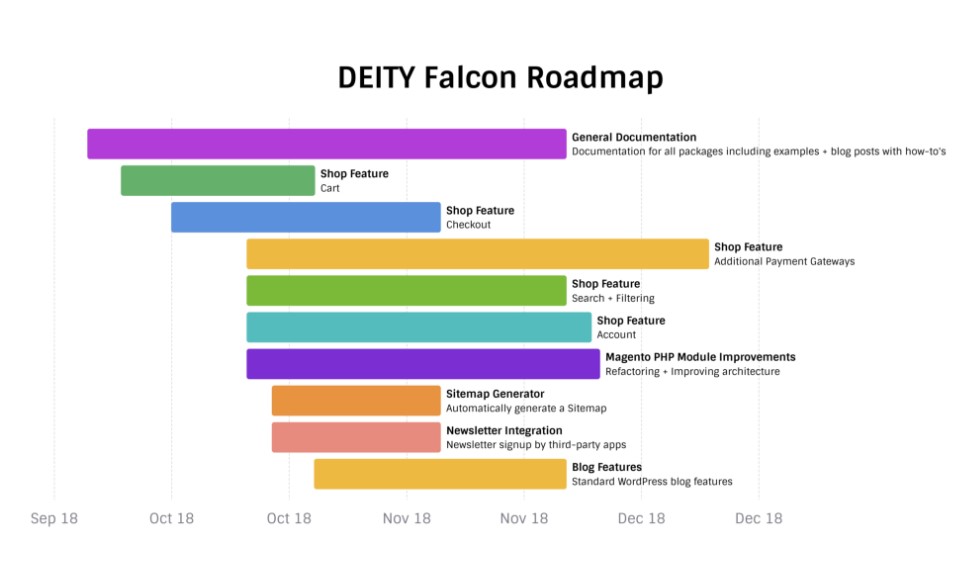 DEITY Falcon is the main product of our partner, and it is definitely worth your attention. Being a platform agnostic, stand-alone but modular library, Falcon opens nearly endless possibilities when it comes to headless PWA websites on the basis of Magento 2 or other systems. The library incorporates the F.I.R.E. principal, which stands for flexibility, integrability, reliability, and extensibility.

DEITY Falcon is exceptionally flexible. It allows building any kind of website. Of course, the initial goal was to develop a fully-featured e-commerce store, but you can leverage the technology in any direction.

DEITY Falcon is integrable with any data source. Does it mean that you can freely connect your Magento 2 website to any external systems? Yes, especially if Improved Import & Export is installed!

DEITY Falcon is reliable as hell. With this PWA solution, you can forever forget about headaches related to high traffic and scalability.

DEITY Falcon is endlessly extensible. You can connect as many custom features to your PWA website, as it requires.

With the F.I.R.E. principal in mind, our partner provides one of the best PWA solutions in the whole Magento 2 ecosystem! Let’s saw a few more words regarding why you should use Falcon.

Reasons To Use Falcon

As you can see, Falcon’s architecture is modular, lightweight, and scalable. You can get all these benefits for your Magento 2 website, creating a headless store on the basis of our favorite e-commerce platform. You can ask any questions in the official slack channel here: . For further information about Magento 2 PWA, read this article: PWA & Headless Magento 2. You can check the DEITY storefront here: . And don’t forget to explore .

If you also want to become our partner, follow this link: Firebear Partner Loyalty Program. We can discuss all the nuances of our Partner Program to make it suitable for your business model.