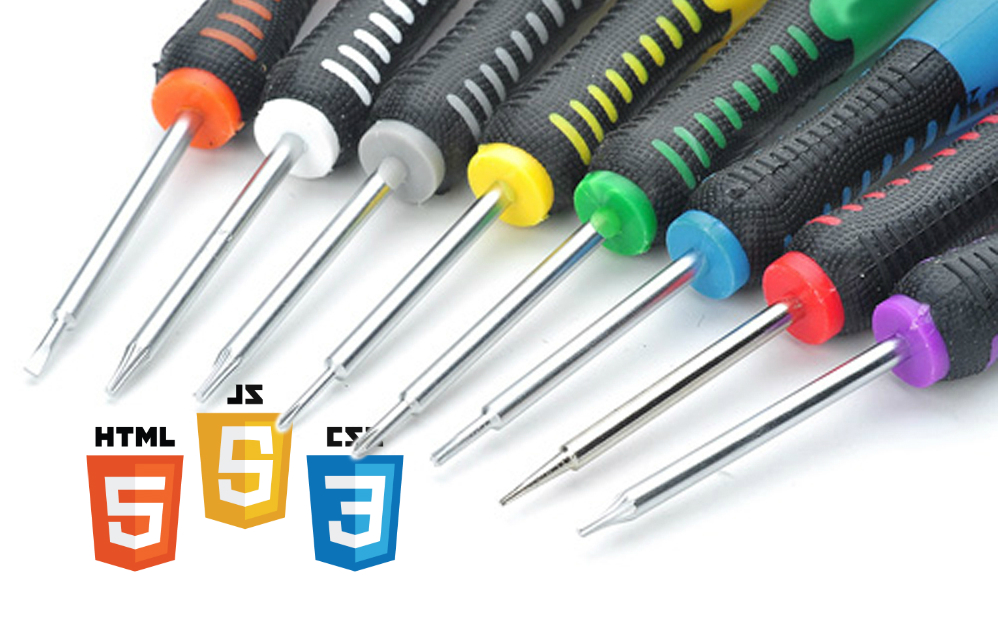 Sometimes we fail to realize that we can make our life easier and reduce the consumption of time to dramatical scale, and it all happens simply because we lack some knowledge about particular opportunities, but it doesn’t mean they do not exist. Therefore, the principal topic of today’s post is to figure out how hybrid mobile application development tools simplify the creation of apps and what kind of platforms we suggest using to develop them.

What is hybrid mobile application?

Basically, it is a usual mobile application that you can easily install on your smartphone, tablet or whatever, but there is a difference in the way it is built. There are 2 ways of building mobile applications – Native and Hybrid. The first one implies that you utilize native languages like Objective-C (for iOS) and Java (for Android) to implement your project ideas. Meanwhile, the Hybrid concept consists in combining the potency of CSS, HTML and JavaScript to expand your abilities and the range of things you can deal with. In fact, its main advantage is that there is no need for you to learn other programming languages in order to create an application, instead you can use web-application development tools.

So, let us present a list of the best platforms for hybrid mobile application development.

The first representative we decided to touch upon today is known to everybody. It is a highly respectable open source platform which has been constantly updated, providing its users with contemporary features and satisfying all trends of modern hybrid application development. We must mention that its tremendous community which stores lots of useful material is able to assist you whenever there is a problem popping up.

Besides, it will certainly attract you by Angular framework availability and other out-of-the-box tools that are capable of creating a great impact on application development process, giving you huge power in your hands. To go native, Ionic enjoys using Cordova, however, it is actually widely utilized one.

Of course we couldn’t help mentioning Ionic’s default pack which already provides you with amazing JavaScript and HTML components as well as highly mobile-optimized library of CSS. 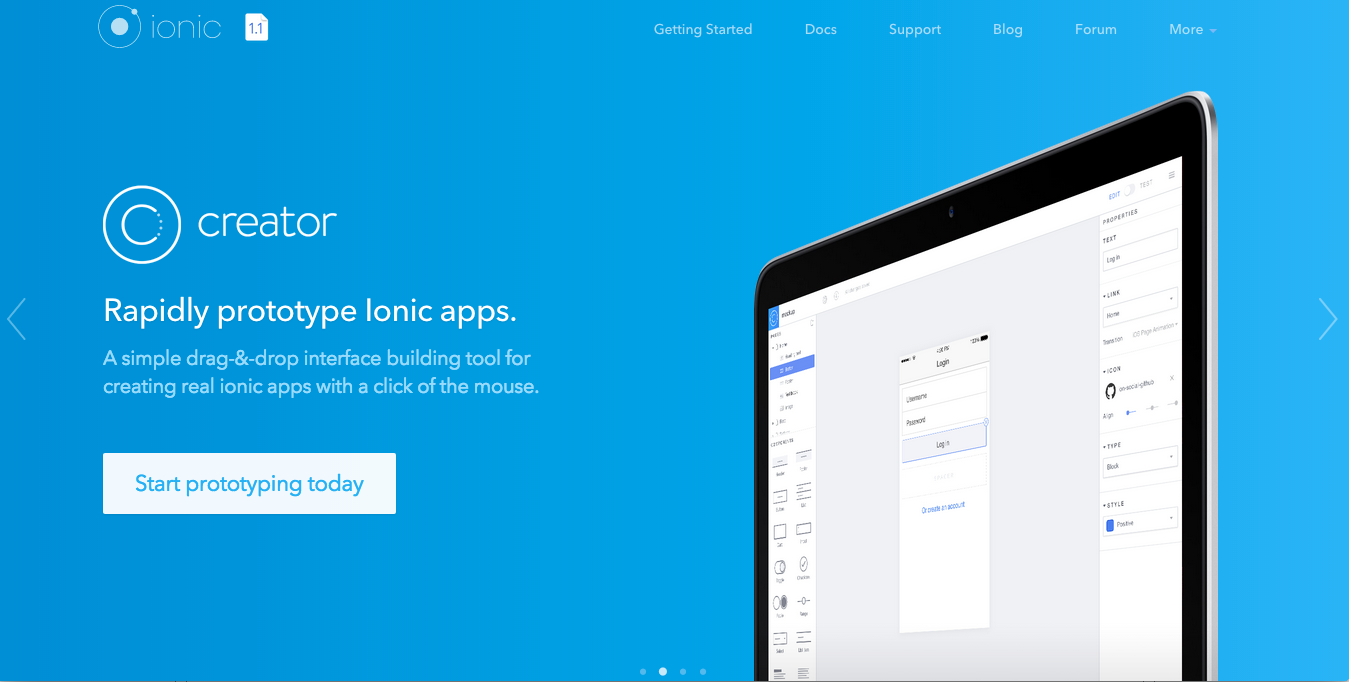 Onsen UI is a quite popular tool and you might have heard of the flexibility it can provide you with. This flexibility is defined by the ability to choose which framework you want to work with – Angular or jQuery. it is an open source platform that can be utilized under Apache license. Furthermore, we would like to say that nowadays it is gaining momentum and in future it may even become a threat to Ionic. Besides, Onsen fascinates its users due to its out-of-the-box  responsive components will greatly facilitate the process of hybrid mobile application development. Even though, we use web-development tools such HTML5 and JavaScript to realize new project idea, it is not complicated to go native, since you can easily utilize Cordova or Phonegap.

Honestly speaking, a great number of people rest hope their hopes upon its advancement and success in comparison to surrounding competitors.

Before we go on talking about our tools, we would like to be sure you understand the concept of PhoneGap and Cordova functionality. You can watch the video below in order to get insight on how it works.

As you might have already realized everything is so simple and doesn’t require either extra expenditures or efforts to learn native languages.

Nice! Here we have already come up to the third representative of top hybrid application development tools list. Just having taken a look at its name we are able to suppose how powerful it may be, since Intel Corporation has performed incredible results in computing industry. In fact, without any kind of exaggeration, we believe that it is extremely potent and outstanding platform for it comprises lots of utile features, tools and amazing frameworks that come in handy during the hybrid app development process, simplifying such procedures as debugging, emulation, testing etc.

What we find marvelous about Intel XDK is app framework availability which includes a big deal of ready to use components aimed at assisting targeted platform adaptation. It is able to provide you with template support for iPhone, iPad, Windows Phone, BlackBerry and Android applications. However, Intel XDK does not bound its spectrum of abilities to app framework, as it also cooperates with jQuery (as well as Onsen does), Bootstrap 3 and Topcoat UI frameworks.

Having provided you with the insight on its enriched features kit, we are able to state that it is actually capable of taking over the application development market. Moreover, the number of developers utilizing Intel XDK is constantly increasing. Let’s see what future will bring to us.

Sencha Touch is an enterprise which enjoys high consideration of diverse companies and in fact it is a great choice for hybrid application development, however not for individual developers or freelancers since it is rather expensive. In this case, we believe that ionic may be utilized instead.

Even though, it is not that cheap to acquire the products of this company, we should say that it genuinely pays off. For instance, ExtJS, highly regarded JavaScript framework lies in the heart of Sencha Touch Platform, providing you with the ability to develop applications of high performance, giving the feeling as if it was native experience. Besides, a wide diversity of widgets, included in the pack, will satisfy your demands in respect of creating native look and feel for world recognized platforms such as Android, Windows Phone, Blackberry, iOS etc. If you are searching for ready to use templates, Sencha Touch template list availability will appeal to you as well as its drag and drop HTML5 visual app builder. 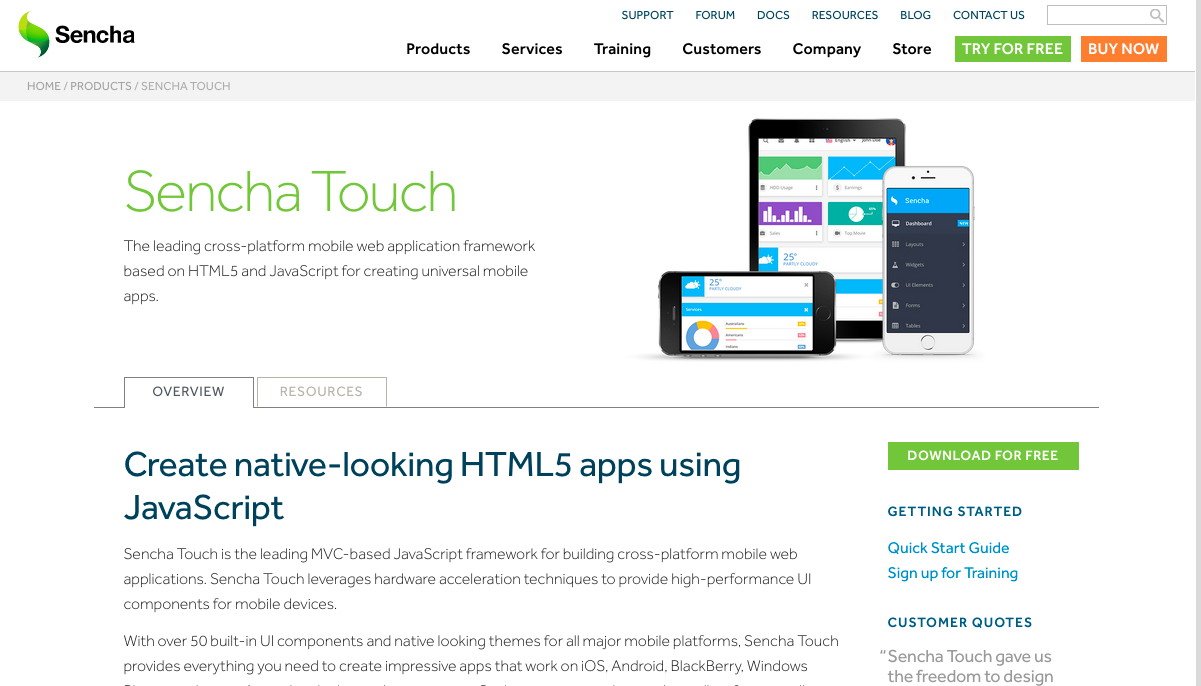 Utilizing HTML5, JavaScript and CSS to create hybrid mobile as well as web applications, with Kendo UI you are capable of developing high quality products since this particular one is renowned for its wide cooperation with other frameworks, allowing you to absorb only the best features and characteristics. It is dramatically interlinked with jQuery, therefore in its pack you receive more than 70 jQuery widgets, as well as you are able to integrate Kendo with Angular and Bootstrap UI frameworks. The privilege to apply Kendo while the hybrid development process consists in custom theme builder availability, making things easier. As regards licensing, Kendo UI provides its users with open source and commercial versions. But, the free one is obviously limited to some extent, disabling several features and giving less devoted technical support.

To underline its significance on the market still, we would like to mention that Kendo UI is looked upon by diverse enterprises and in fact is utilized by giant companies and organizations such Sony, NASA, Microsoft, Toshiba, Volvo etc. 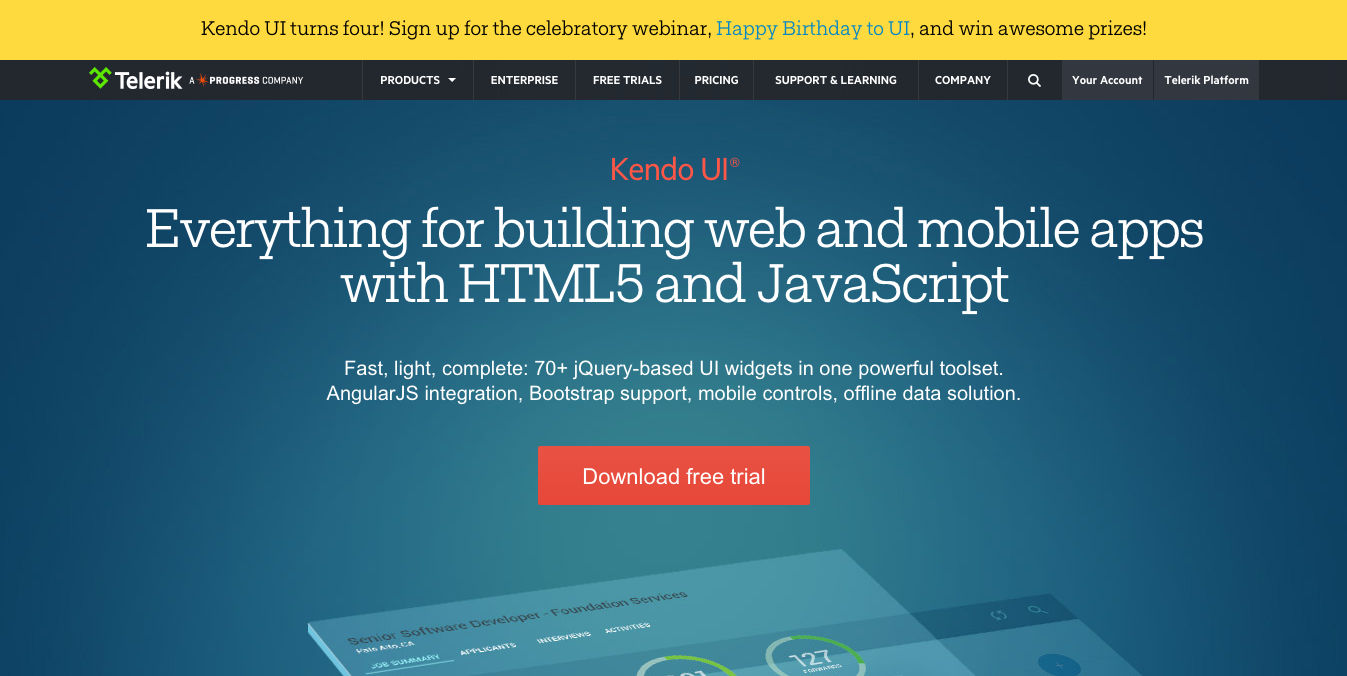 Framework 7 is an open source potent framework which appeals to developers due to its power concentration on a particular field. We are not afraid to state that it is considered to be a prominent one among hybrid application development tools for iOS platform. By using CSS, HTML and JavaScript you are able to create nearly native iOS applications. In comparison to the aforementioned frameworks this one differs in its abilities to work with other platforms, excluding iOS obviously. However, there is something it can please you with, since the Framework 7 pack comes with amazing out-of-the-box features (e.g swipe back) you will definitely suck an advantage out of. Apart from it, the framework will fascinate you with diverse UI components such as: media lists, side panels, models, list views etc. As we have already mentioned that it is a open source framework, it can be applied in accordance with MIT license. 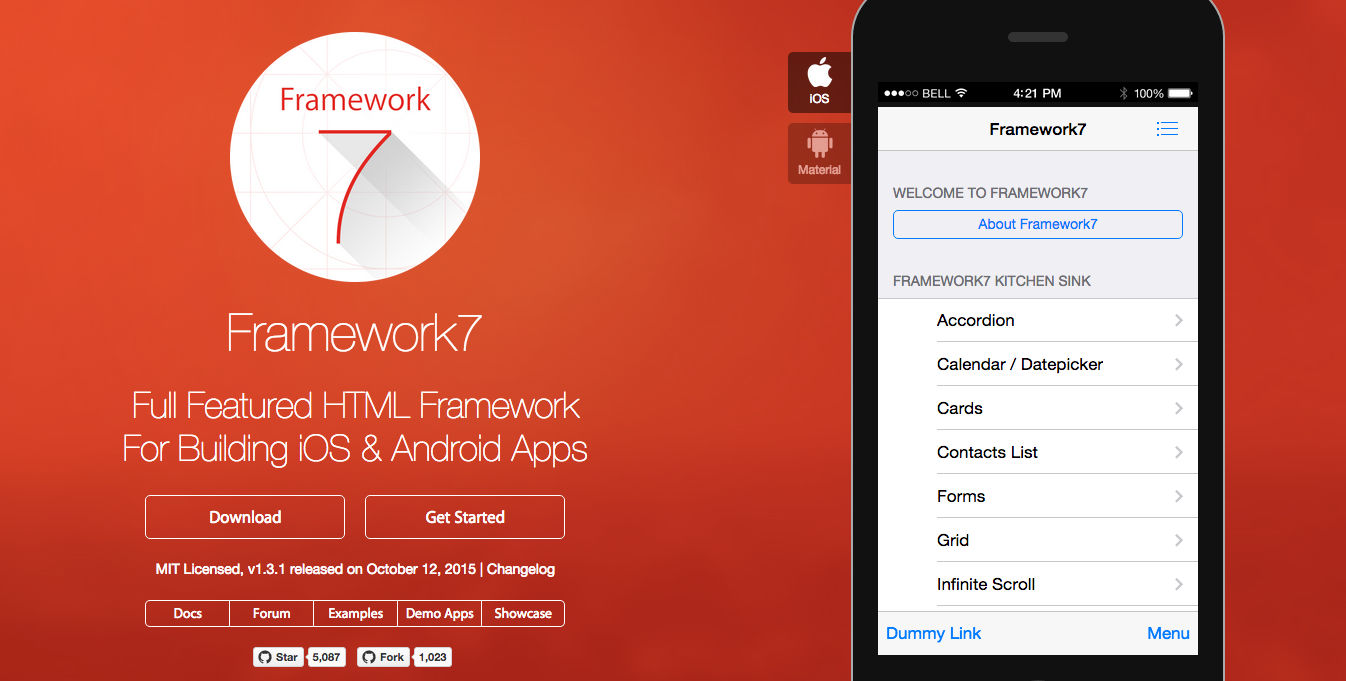 jQuery has been worthily demonstrating its dignity to mobile application development community, defending itself from competitors. It has appeared thank to devotion of jQuery users who worked hard to revive their “colleague” and nowadays It completely relies on the firm jQuery and jQuery UI foundation.

The principal focus of jQuery Mobile is not guarantee a native look but rather provide you with an impeccably smooth functioning of your mobile, desktop, and tablet applications. 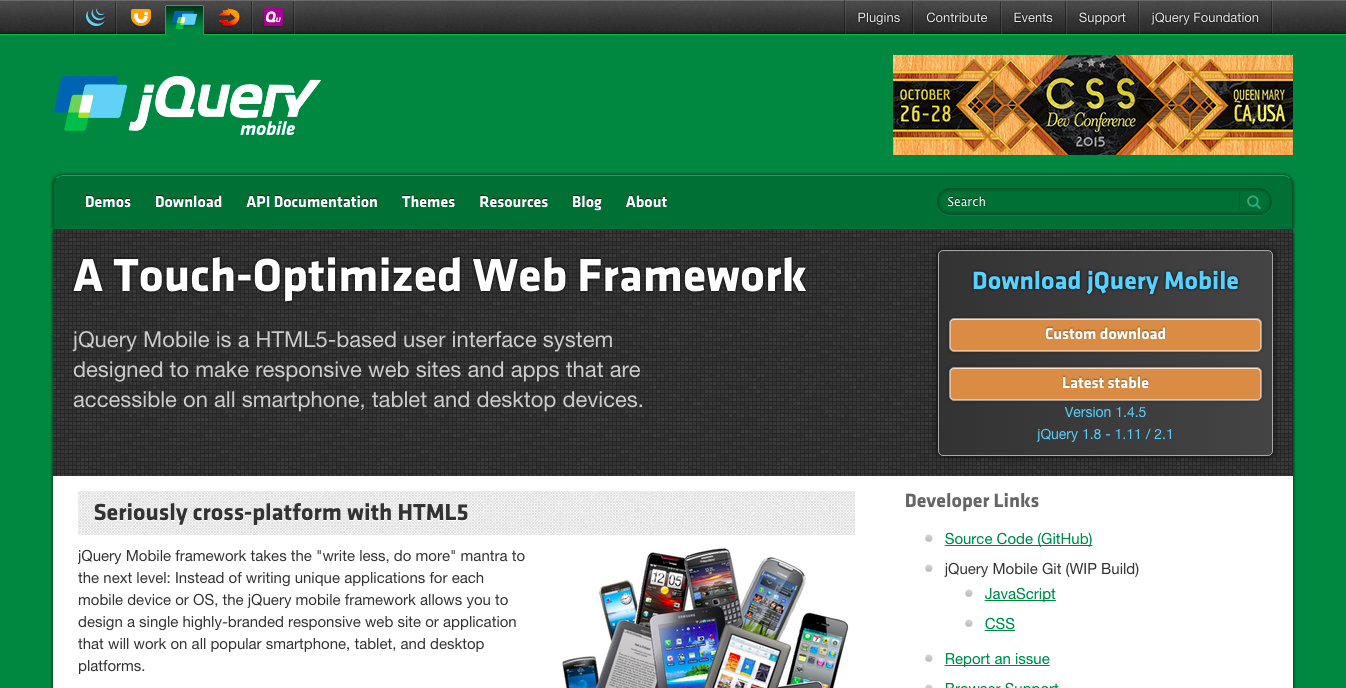 If you work a lot with Bootstrap 3 and Angular framework for the hybrid application development, you are able to make the most of Mobile Angular UI, since their cooperation is so solid and actually it is unsubtle to everybody. To provide you with great mobile experience, it prefers using fastclick.js and overthrow.js. Besides, Angular UI is regarded to be kind of extension to Bootstrap, however there are no jQuery or bootstrap.js dependencies.

In fact, Mobile Angular UI includes different components such as: sidebars, scrollable areas, overlays, switches etc. which will assist you in creating an HTML5 awesome mobile application, making the development process easy and pleasant. As we know, Bootstrap 3 falls short of such elements, thus we can say that they perfectly complete one another.

Mobile Angular UI is an open source platform, when it comes to licensing Angular reminds us Framework 7 since it is utilized under the same license – MIT license. 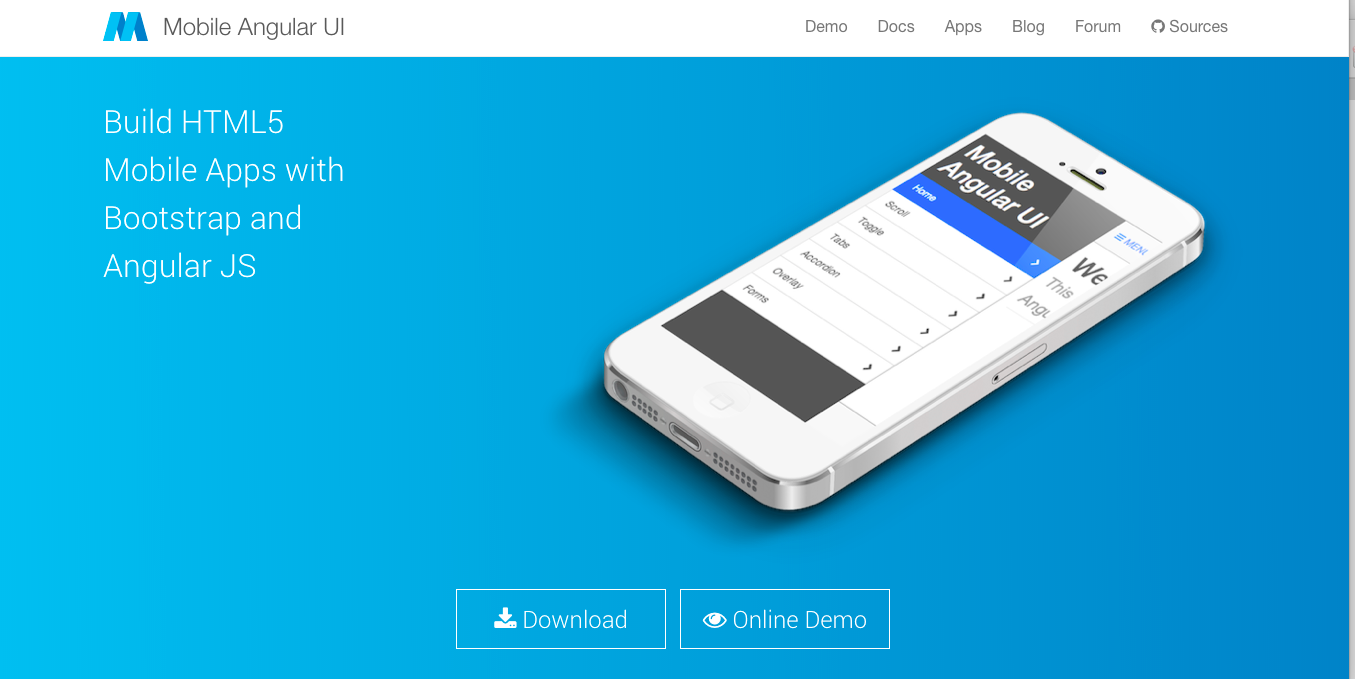 Famo.us is a great HTML5 application development tool which concentrates its attention particularly on the rendering of graphics, 3d and 2d , therefore you can be sure that this platform will perfectly suit games development. It certainly cares a lot about providing you with as much closer to native experience apps as possible. 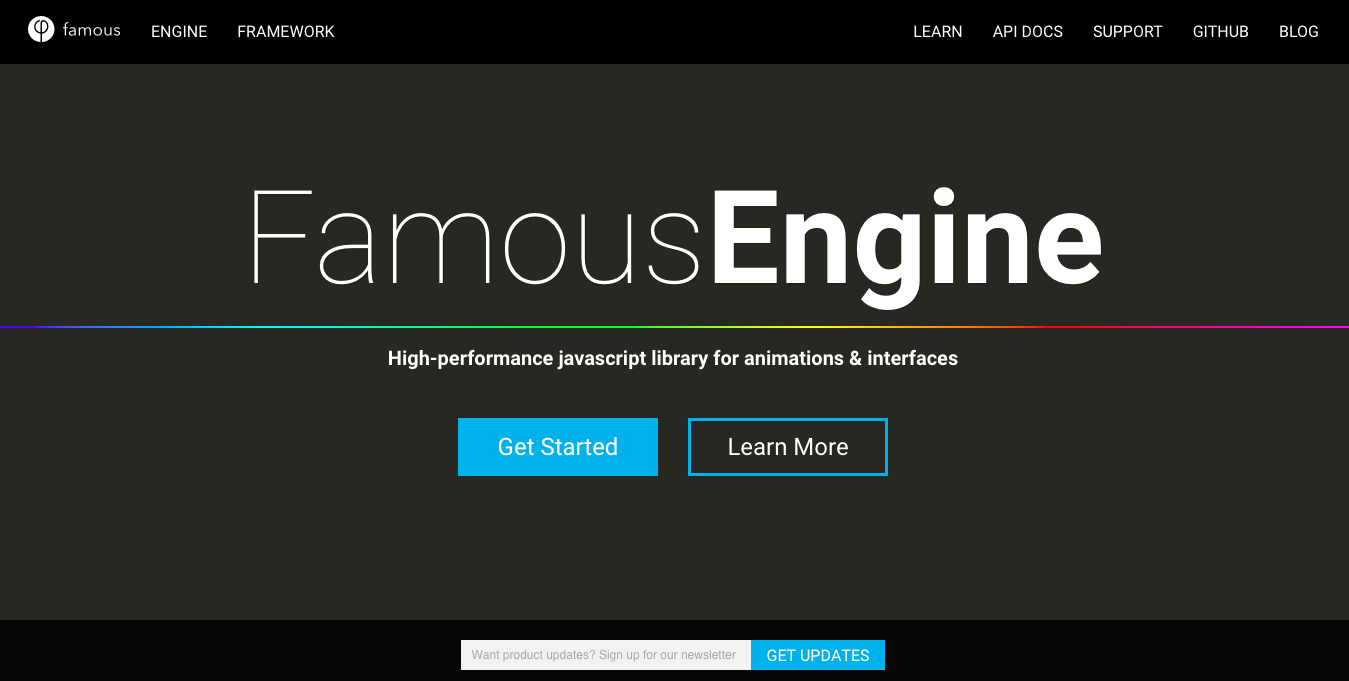 Here we have come up to the 10th representative of mobile hybrid application development tool list. This one is renowned in the commercial space and has already gained its position in the market. In fact, Monaca features an enormous variety of modules and components, therefore just right out-of-the-box you acquire a great deal of material to work with. To go native, Monaca uses Cordova, basically as the major part of other mobile hybrid app. development platforms. It is worth mentioning that Monaca is capable of simplifying the process of application development, since it provides you with cloud-powered tools and services. Besides, the spectrum of its abilities will appeal to you, as you can start writing and implementing your project idea from the scratch and till the very end.

However, there are still some things Monaca can surprise you with. As the matter of fact, while utilizing Monaca, we can observe such a deep integration with Onsen Framework. But it doesn’t mean at all that you cannot use other frameworks.

Of course, while talking about the best hybrid mobile application development platforms, we couldn’t help touching upon Trigger.IO. Why?

As the matter of fact, we would say that it rather stands out from the crowd and demonstrates its uniqueness. Having covered all the tools mentioned above, we could observe the situation, that lots of them apply Cordova or PhoneGap for native access. However, in case with Trigger, it suggests us using another tool, called Forge JavaScript API which is virtually said to perform better results in comparison to what Cordova and PhoneGap do.

To sum it up, the first thing you should notice is that hybrid application development is gaining momentum, as it features the approach of writing once & running everywhere. That is why a big deal of developers are walking out on native languages, for they feel kind of restricted.

Consequently, for we have looked through the list of top hybrid mobile application development platforms, we still want to say that when it comes to development process, it boils down to diverse factors that surround you: the size of your company, the platforms you work with, your target groups, the amount of money you are ready to contribute to a venture etc. Therefore, we would like you to understand that you should choose the one that suits your business the best.

But, if there is any question you would like to pose, please don’t hesitate to do it, because we are here to assist you in the development process.